In 2019 several organisations including European Association for the Study of Obesity, Obesity Action Coalition and World Obesity Federation, decided to stop having separately scheduled days and weeks and instead join forces on a single new World Obesity Day, starting on March 4, 2020. 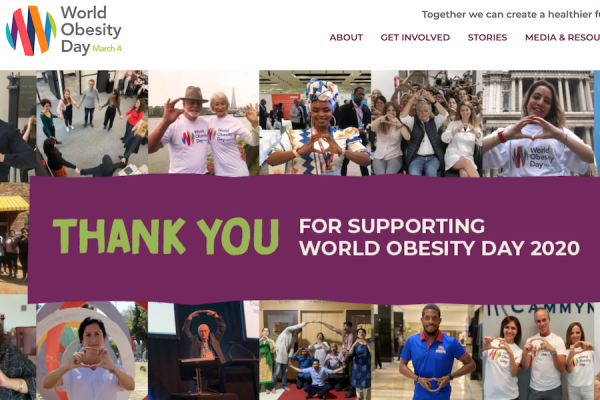 With Obesity affecting about 1 billion adults and children worldwide, and is a shared challenge for all countries, we agreed to leverage the unifying day to rally around a broad theme for 2020 of “roots of obesity,” and a call to action built around a ROOTS declaration on comprehensive actions that an overarching strategy could include, with which the March launch was planned.  Then came January, and with it news of COVID-19. At that point there were indications of links between NCDs and more severe cases of the novel coronavirus, but the evidence was still building. Meanwhile, thankfully, the strong national, regional and global obesity organisations and their networks meant that a groundswell of support for World Obesity Day was already in place, from Chile to Kuwait and the UK to Australia.

The campaign proceeded with high profile and wide ranging engagement - Actress Helen Mirren volunteered to pose in a World Obesity Day t-shirt, and allies ranging from Zoleka Mandela to star Caribbean cricket players and members of FC Barcelona adopted the “O” sign to demonstrate support. Two thousand advocates and professionals in Mexico City joined a day-long symposium with ministerial participation, and a report on obesity stigma received widespread coverage, with overall media reach for the day at 1.3 billion.

Given that the media stories were already largely focused on COVID-19, it was heartening to see much support and interest there was for obesity, and indeed the topic soon became especially relevant as evidence grew rapidly that obesity was a likely risk for COVID-19 complications and mortality. Between the elevated profile of obesity on World Obesity Day and dramatically increased demand for information, traffic to the World Obesity website has increased by thousands per day.  The sustained interest in obesity speaks to how much countries and individuals see it as a challenge, one that is still largely underrecognized or distorted by stigma and misunderstanding.

Thus the challenges of navigating the new World Obesity Day at the start of the pandemic have evolved into increased opportunities for dialogue and engagement. World Obesity Day became a story of preparing for the unexpected and seizing the opportunity to give long-overdue recognition to a disease that affects hundreds of millions worldwide, and deserves far greater attention and action.