Without the participation of the community, the Global Week for Action on NCDs couldn't be the success it is today.

In early 2020, following a consultation with our network, and with a view to the fourth UN HLM on NCDs in 2025, NCDA identified 5 key gaps to advancing progress on NCDs. At the 3rd Global NCD Alliance Forum, NCDA launched a discussion paper ‘Bridging the Gap on NCDs: From global promises to local progress’ and compass to guide civil society to identify opportunities and help bridge those gaps, namely Accountability, Investment, Leadership, Community Engagement and Care.

The third edition of the Global Week for Action on NCDs took place in September 2020, and marked a shift in campaign approach. The refreshed campaign draws on the outrage, energy, inspiration and determination generated since its first year, retaining the same goals set in 2018 and same vision of an inclusive, people-centered, rights-based and culturally sensitive campaign while adding a dose of action-oriented optimism.

From 7-13 September 2020, the third Global Week for Action on NCDs focused on ACCOUNTABILITY, reaching more than 11 million people, thanks to thousands of NCD change-makers in more than 130 countries.

The second Global Week for Action in 2019 built on a momentous first year and was geared towards the first UN High Level Meeting (HLM) on Universal Health Coverage (UHC). The campaign focused on specific advocacy priorities and asks for the UHC HLM.

During the week itself, the #enoughNCDs campaign hashtag and associated messages reached over 2.4 million people on Twitter alone, with over 1000 people contributing to the online conversation from 88 countries, and more than 50 activities around the world.

The Global Week for Action on NCDs is a global campaign that aims to unite the NCD movement each year under a specific theme.

The 2018 High Level Meeting (HLM) on NCDs inspired the Global Week for Action as part of wider campaigning toward the 3rd UN HLM on NCDs in September 2018 under the theme - ENOUGH. OUR HEALTH. OUR RIGHT. RIGHT NOW.

As attention pivoted from Geneva’s World Health Assembly launch and advocacy to the UN HLM, country and region-based advocates developed localised version of the ‘ENOUGH’ campaigns, mobilising and demanding action from political leaders.

Using Twitter as an indicator of the first ever global NCD campaign’s reach, more than 1,200 contributors in over 80 countries produced more than 3,100 tweets using the #enoughNCDs hashtag, reaching more than 4 million people. 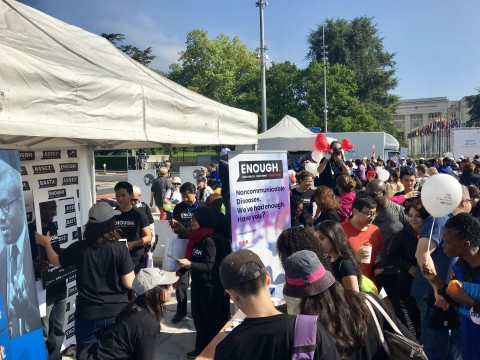