NCD Countdown 2030 shows pathways to help countries get on track to SDG 3.4 Share

Many countries are falling short or behind on their commitments to reducing premature mortality from chronic diseases, NCDs, according to a new report, NCD Countdown 2030: pathways to achieving Sustainable Development Goal target 3.4. 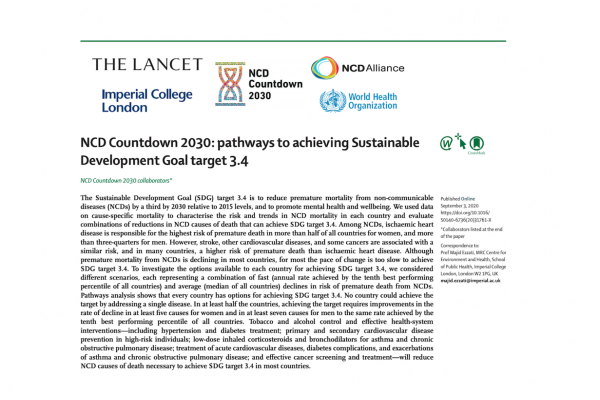 The 2nd edition of the NCD Countdown 2030 report, published today in The Lancet, ahead of the Global Week of Action on NCDs next week has revealed that the relationship between COVID-19 and non-communicable diseases highlights urgent need for governments to implement policies to prevent avoidable deaths from chronic diseases.

Around the world, the risk of dying prematurely from preventable and largely treatable chronic diseases such as stroke, heart disease, and stomach cancer has declined steadily over the past decade, but death rates from other chronic diseases such as diabetes, lung cancer, colon cancer, and liver cancer are declining too slowly or worsening in many countries.

Many countries are falling short or behind on their commitments to reducing premature mortality from chronic diseases, or non-communicable diseases (NCDs). Among high-income countries, only Denmark, Luxembourg, New Zealand, Norway, Singapore, and South Korea are on track to meet the SDG target for both men and women if they maintain or surpass their recent rates of progress.

The UN measure of progress towards the SDG target 3.4 is reducing by one-third the risk of death between 30 and 70 years of age from four major groups of NCDs (cancers, cardiovascular diseases (CVDs), chronic respiratory diseases, and diabetes), termed NCD4.

Worldwide, deaths from stroke, heart disease and stomach cancer are falling, although overall progress has slowed compared to the previous decade, according to WHO. Deaths from diabetes, lung cancer, colon cancer and liver cancer are stagnating or rising in many countries. The NCD Countdown 2030 report shows that:

"To move forward we must learn from those countries that are doing well and replicate their strategies to NCD prevention and healthcare,” said Professor Majid Ezzati, Professor of Global Environmental Health at Imperial College London, and study lead “Our analysis shows that every country still has options to achieve SDG target 3.4 but they need to address multiple diseases and have strong health systems.”

The 1st NCD Countdown Report was released in 2018.