THIS BLOG FROM ACCESS ACCELERATED IS PART OF OUR MEMBER-AUTHORED SERIES ON NCD INVESTMENT.

Decades of inattention and chronic underfunding have profoundly impeded the world’s ability to deal with the complex and often deadly effects of noncommunicable diseases (NCDs). That’s why the theme for this year’s Global Week for Action on NCDs is “Invest to Protect”, as it shines a necessary spotlight on the urgent need to prioritize investment in NCDs.

NCD cases continue to rise around the world. They are the leading cause of mortality and disability globally, and that burden falls most heavily on low- and middle-income countries (LMICs), further widening the equity gap between rich and poor nations. It is clearer than ever that countries simply cannot afford to continue to ignore NCDs.

Despite this grim reality, important progress has been made in recent years. The issue of NCDs has gained greater traction on the global development agenda in the past decade, as evidenced by the landmark 2011 UN Political Declaration on NCD Prevention and Control, the 2025 global NCD targets, the WHO Global NCD Action Plan 2013-2020 and the inclusion of NCDs in the UN Sustainable Development Goals.

With the support of Access Accelerated, the World Bank has developed a new approach to helping LMICs translate these global commitments into policy action and investment. By connecting the World Bank with the initiative’s global network of member companies, this has led to more effective public-private sector engagement which has helped to catalyze greater investment, including national investment and World Bank-funded loans, to support countries in strengthening their response to NCDs.

It is clear that without resilient health systems supporting universal access to NCD services, there can never be a sustainable response to NCDs. Simply put, successfully addressing NCDs demands Universal Health Coverage (UHC). That’s why the drive for UHC is a critical element of the work being done by the World Bank and Access Accelerated, informing investments and initiatives in countries around the world.

As countries everywhere face the devastating social and economic consequences of NCDs, governments are being tasked with the challenge of both formulating and financing a response to the threat. It is critical that governments take the lead, and the World Bank is working with countries to help drive health system policy and legislative change to deepen and expand access to NCD health services and financial protection for people living with NCDs and their families.

A report by the World Health Organization shows that investment in a core set of NCD interventions is within reach of most countries. This equates to an average spend of under USD$1 per person each year (equivalent to 4% of health spending) for low-income countries and up to USD$3 per person (equivalent to 1% of health spending) for upper middle-income countries. In both cases, it demonstrates that relatively small investments can help avert the crippling economic losses associated with NCDs.

Presenting a compelling case to invest in NCDs requires a clear understanding of the short- and long-term socioeconomic costs of NCDs (including productivity loss, reduced household income, and the burdening on health systems) and the potential benefits of interventions and their scale-up. A targeted and strategic approach is essential to informing investment that yields the greatest impact.

Confronting the NCD challenge in Kenya

One example of how the Access Accelerated-World Bank partnership is supporting countries to tackle NCDs head-on is Kenya, a country where NCDs cause nearly 40% of deaths. Here, the economic loss stemming from NCDs is calculated in the hundreds of billions of Kenyan Shillings. The 2020 study Combating Noncommunicable Diseases in Kenya by the World Bank with support from Access Accelerated is one of only a few published investigations into the economic impact of NCDs in Kenya. It found that seven NCDs resulted in an economic loss of KSh230 billion in 2016, equivalent to 3.4% of the country’s gross domestic product.

Not only are NCDs hampering economic progress at a country level, but families in Kenya are being heavily impacted, with NCDs reducing household income by more than 28%. The study also concluded that a KSh142 billion investment in four of the major NCDs in Kenya over a 15-year span, from 2016 to 2030, would save more than 100,000 lives and provide an estimated economic benefit of KSh175 billion–a powerful and persuasive case for urgent investment that has the potential to transform the NCD landscape in the country.

In countries around the world, the challenges that lie ahead are daunting, but the evidence of progress signals that they are far from insurmountable. Globally, a new health and development approach to NCDs that includes supporting stronger, targeted, catalytic NCD investment and innovative partnerships is what’s urgently needed to empower countries around the world to overcome the social and economic barriers that hinder their fight against NCDs.

Learn more about the ways the powerful partnership between Access Accelerated and the World Bank is making a difference.

Martin Bernhardt is Director of Access Accelerated where he leads overall strategy and implementation for this multi-year initiative. He is an Economic and Social Scientist by training, with specialization in Pharmacoeconomics, with a 20+ year experience in the pharmaceutical industry. He was until 2021 Head of Public Affairs Global Health in a major biopharmaceutical company, leading the relations with the World Health Organization, the Global Fund, and other global institutions. He has a long track record of engagement in the field of non-communicable diseases – he was until 2021 co-chair of the NCD Alliance Supporters Group.

This blog has also been published on ncdalliance.org. 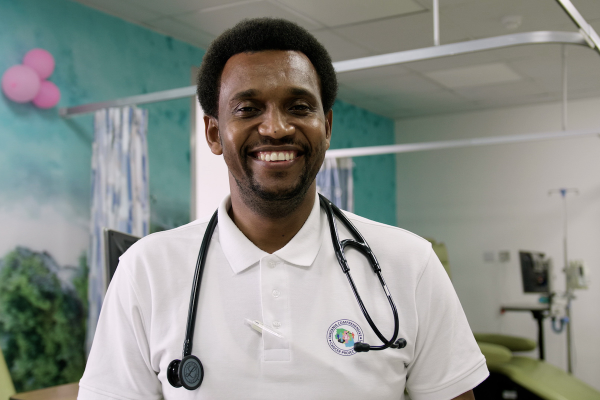